Could music videos be key to the success of Facebook’s Watch video platform?

That, apparently, is what Facebook is thinking – according to a report from Bloomberg, Facebook is “in the midst” of negotiating new licensing deals with Universal Music Group, Sony Music and Warner Music Group, in order to secure the rights to include music videos on its Watch platform.

“Facebook’s current deals with record companies let users include songs in the background of videos they post on the social network, such as a clip from a wedding or a skateboarding stunt. But Facebook doesn’t yet have the rights to offer the official music videos to hit songs.”

If Facebook were able to secure the rights to include music videos, that could make it a more viable alternative to YouTube, while it could also look to offer better terms to rights holders, which could, potentially, also see Facebook hosting exclusive clips. That would be a major win for its video platform.

Indeed, music videos are a key part of YouTube’s eco-system. Of the 30 most-viewed YouTube videos of all-time, 28 of them are music video clips (non-music videos marked in yellow). 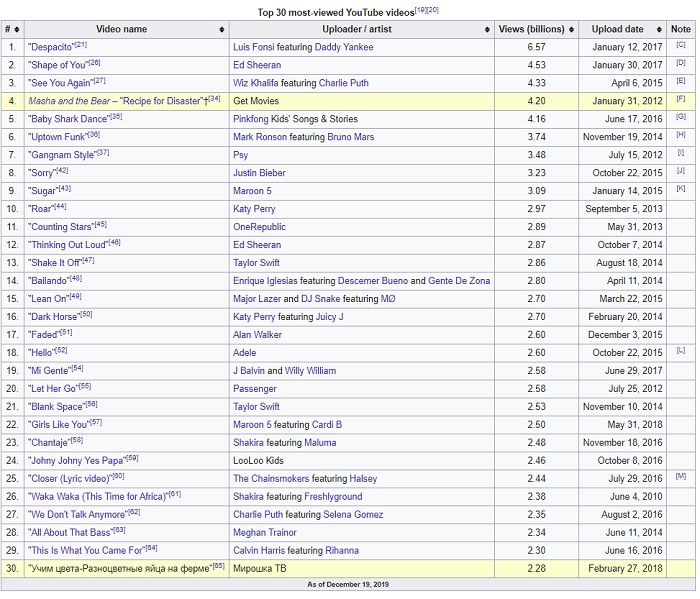 If Facebook could get a few of those in 2020, that could drastically alter the fate of its Watch platform.

Facebook Watch hasn’t caught on as Facebook could have hoped, though it has shown enough interest to suggest that there is potential there. Facebook has reported that some of its Watch originals are now regularly seeing millions of viewers, while The Social Network reported back in June that 720 million people monthly, and 140 million people daily, now spend at least one minute consuming Watch content.

720 million is a lot – but then again, Facebook is used by 2.4 billion people each month overall. So when you consider those Watch stats on balance, it’s not a huge amount of Facebook’s overall audience that’s actually paying attention to its video offering.

But that could still change – notably, Facebook this year made it easier for users to view Watch content on their home TV sets via its Portal smart home device. Portal, too, hasn’t been a big hit for Facebook as yet, but if it can improve its offering, and facilitate direct connection of Watch programming to your home TV, that could give Watch a significant boost – which would be further aided by any music video deals, and with Facebook’s coming news content, part of the expanded roll-out of its dedicated News tab.

It’s another element to keep an eye on, because if Facebook can make Watch work, it could facilitate a whole range of new advertising opportunities within the app.